What Readers are Saying....

"Steaminess and tenderness all in one! You have to read this series!"

"I highly recommend this book I have read book one and this continues to deliver in the same way. great friends lives that mesh with sex love a little heartbreak lots of laughs"

"I loved this story and Pete is the perfect CEO to play on all our fantasies and Holly's."

"This book had me laughing out loud, shedding a few tears and was really hard to put down. I would love to see this book turn into a movie or the series turn into a series on tv. I would watch every episode. It really did pull me in, I could just picture the scenes in my head. The more I got to know the character Pete, the more I would love to find a man like that in real life"

"My first thought after reading the first 4-5 chapters, was Wow! These to are like a couple of rabbits high on steroids! But then it started to calm down into a really great story with a lot of depth, as well as heart-warming, and heart-wrenching moments"

“Goodnight, children.” Holly smiled as Elena shooed them into the back.

“Seems I'm not the only one you've got wrapped around your little finger,” said Pete.

Holly raised an eyebrow, “I don't see you getting wrapped around anyone's finger, Mr. Bigshot! But yes, I think I did just make some new friends.”

“Mr. Bigshot?” laughed Pete. “What the hell makes you say that?” He was surprised by the name and even more surprised that he liked her using it.

“Oh, come on,” she smiled. “It's obvious that you're used to saying 'Jump' and having everyone ask 'How high?'”

Pete laughed. She was probably right, but he didn't like to think of it that way. He couldn't work out the look on her face. Was she dismissing him, or tempting him? He gave her a hard stare, remaining silent, watching the laughter fade from her face as she stared back at him. He held the silence a few moments longer than was comfortable, then said, “Jump!”

She laughed. “No way, Mr. Bigshot. You're not getting me like that.”

Though she was laughing, the gleam in her eyes looked a lot like lust and that dress couldn't hide her taut nipples. She really did want him. Perhaps not as much as he wanted her, that might be impossible, but her body was giving her away. Would it really be such a bad idea to act on something they both wanted so badly? “What way will I get you then?” He couldn't resist asking and was shocked when she met his eyes.

“Any way you want as long as it's just sex, no strings.”

He wasn't used to a woman taking his breath away and leaving him speechless, but here she'd done it again. She stood before him, chin lifted, shoulders thrown back, lips slightly parted, looking so very kissable. But he shouldn't. They shouldn't. How could he not?! Or was she really just teasing?

Alonso rescued him. “We have your table now, my friends. The best in the house. Please, follow me.”

Pete allowed Holly to walk ahead of him, watching her backside sway while considering her words, 'Any way you like.' What was that quote? Something about 'Let me count the ways'? It would take them quite a while to work through all the ways he wanted her! She couldn't be serious? And could he do it if she were? More like could he stop himself? He already knew the answer to that one.

Once they were seated and Alonso had left them with a bottle of the Rioja, he peered over his menu at her. “It's not fair to taunt a guy like that, you know. Especially to tease him with something you can see he wants so badly.”

“I wasn't teasing. I was offering.” She looked up at him and he locked her eyes with his own. Needing to pin her down on what she was really saying.

“Any way I like?” He watched her swallow and press her lips together as she nodded slowly. “Why, Holly?”

“It's obvious that I want you. Beyond that, I'm not sure I can think straight enough to make sense of anything!”

“Well, I think it's obvious that I want you too. It's also obvious that we shouldn't. We're from different worlds. We have no business being together, but we're going to be seeing a lot of each other until Emma and Jack's wedding. We can dance around it and make life difficult, or we can get it over with and out of the way.”

“Get it over with?!” Pete was taken aback by her forthright explanation and pretty much insulted that any woman, especially one he wanted this badly, would consider sex with him something she had to 'get it over with.' He stared at her, eyebrows lowered. The waiter came to take their order, giving Pete a moment to calm down. Once the waiter had gone, he looked at Holly again.

She smiled sweetly at him, “What's up, Mr. Bigshot, like to think you're something special do you?” 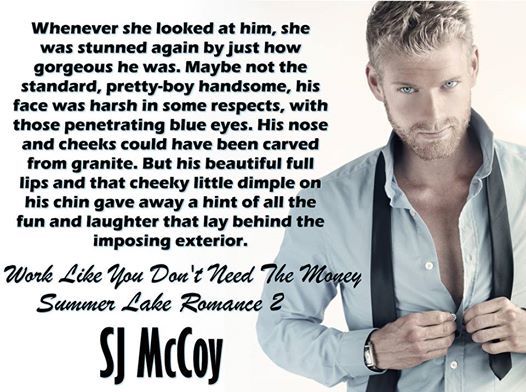