Click here to Buy direct and SAVE at SJMcCoyBooks.com

Seasons is a whole new series set in Summer Lake.

I was never sure that I'd be able to leave the lake behind completely. I fell in love with the place and the people. It's my happy place - my escape. Over the course of thirteen books, I learned that it had become a happy escape for many readers, too. The original characters are still going about their lives in my head, and it seemed selfish not to share what they're up to with everyone who came to know and love them.

So, in the Seasons series, you will of course, get to know a new couple in each book and follow them as they find their forever and you'll see all our old friends around town, too. They'll be involved in the new stories to some extent but will sit back enough that this Seasons series will be able to stand alone for anyone who hasn't read the originals. 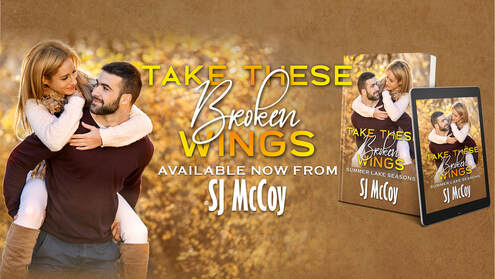 ​
​The series begins with:

Book One: Angel and Luke in Take These Broken Wings

​Angel came to Summer Lake to work as the manager of the new lodge over at Four Mile Creek. She didn't get off to the best start in terms of making friends, but there was one guy who was interested in her from the beginning  - Luke is a pilot who works for the flight school and charter company based at Summer Lake Airport. He's spent a over a year hoping for a chance with Angel, but he's spent over a decade working toward getting a corporate pilot job. Of course they both land in his lap at the same time.

What's a guy to do when he has to choose between his dream job and his dream girl?

and for a limited time you can get it FREE!

Zack’s spent the last ten years hiding from his past. That’s meant staying on the move, never settling in any place for too long, and never letting anyone get too close.

There's a girl he wishes he could get close to but he's had to hide his heart and be content with her friendship.

Hearts can only stay hidden for so long, but when there’s too much love to hide, will the danger from his past finally track him down and destroy them both?
​

Book Three features Logan and Roxy in Sunshine Over Snow

Roxy's been in Summer Lake for a couple of years now. Her life there is much better than her old life. Her guy friends look out for her, and she’s not above looking at Logan. He’s gorgeous! But looking is all she’ll ever do. He’s not boyfriend material, he’s a player and a big old flirt.

At least that’s all he’s ever shown himself to be.

But when part of her old life shows up at the lake, Logan’s ready to step up and show he’s a true friend – and maybe a whole lot more.

Book Four features Ivan and Abbie in Chase the Blues Away

Abbie’s not proud of the way she’s lived her life but she’s trying to make up for it.

She’s ready to settle down; all she needs is a suitable guy.

Ivan’s gorgeous. As an added bonus he’s kind and caring, too.

But he's a guy with a past, and she’s had her fair share of sexy, unsuitable men.

She thinks he’s not what she needs. He discovers she’s everything he wants.

But will Abbie’s insistence on making amends for the past mean they can never have a future together?

Book Five features Colt and Cassie in Forever Takes a While

But life got in the way. Their choices led them down different paths. Though, that was only supposed to be for a while.

Now, she’s back in Summer Lake after more than ten years, and he can’t understand why she won’t even talk to him.

He respected her choice to pursue her career instead of coming back to build a life and a family with him. But after all this time and all that they shared, why doesn’t she even want to be his friend?

Amber’s loving life in Summer Lake. She’s settled into her job at the post office. She’s met some lovely new people. And most of all she’s free.

It wasn’t that her old life was so bad. She worked for her parents; she liked being able to help them out. What she didn’t like was feeling trapped in a relationship with their general manager.

She was glad to leave him behind. And ever since she came to the lake, she’s had a not so secret crush on Austin.

He was attracted to Amber from the moment he met her. But before he could act on it he had to extricate himself from a bad relationship that he’d let go on too long.

Now, these two have a chance to get together but will some well intentioned interfering by Amber’s sister, Jade, help them on their way or leave them stuck in a web of lies?

Their story is called Please Don't Say Goodbye - and it's coming very soon!