Grab the first FOUR books in the Summer Lake Silver series at a special discount while you can!

Are you ready for Dalton and Taryn's story? You're in for quite a ride.

We first met these two in Adam and Evie's story and they didn't exctly get along.

Now, they're both living at the lake and they bicker and fight over just about everything. But they're about to learn that even they can't fight the moonlight!

You can get a discount from SJ's Store

Adam and Evie's story is out now!

Get it at a discount on SJMcCoybooks.com
​
Or you can order from the usual retailers:

Russ and Alexandria's story is out now!
​
Get it at a discount at SJMcCoyBooks.com

If you've read the earlier Summer Lake Silver books, then you've already met Russ. He owns the gym. Cal, Manny and Ryan, and a bunch of the other guys in town work out there. Russ is a laid back kind of guy. If you read Milkshakes and Mistletoe - and don't worry if you haven't you don't NEED to, but you might like to - you've already had a glimpse of Alexandria DuPont. She's the CEO of DuPont Wineries, matriarch of the Dupont family. She might not be the kind of woman you'd imagine Russ going for, but I've been asking him for a while how he saw his story going and as soon as he heard about Alexandria, he decided that she was the one for him!
​
Synopsis:

Russ leads a pretty laid-back life these days. After serving his whole career in the Marine Corps, he came back to the town where he grew up and opened a gym.

He has a great house on the lake, he loves his business and what it does for his clients, and he has a great bunch of friends. Life is good.

Okay, so he doesn’t have a woman. He doesn’t need one. Doesn’t think he’d want one. He’s finally building a real relationship with his daughter. But she’s the only woman he can see in his future.

When Alexandria Dupont walks into the gym, all Russ sees is a stressed-out, aloof woman – but even then, he senses that there’s more to her. Perhaps she’s an acquired taste, like fine wine.

Alexandria Dupont is not in Summer Lake by choice, but of necessity.

Some people might not see it as necessity, but she most certainly does. She’s recuperating. She was rushed into the hospital at home in Napa just before Christmas with a suspected heart attack.

It wasn’t a heart attack. It might almost have been easier to face people if it were. But no, it was an anxiety attack. Her father would turn in his grave! He raised her to be stronger than that.

So, she’s in Summer Lake to recuperate – she’s not hiding out, not really.

She’s supposed to be taking it easy, but she doesn’t know how. She’s the matriarch of Dupont Wineries. She runs the company, it’s what she was raised to do, all she’s ever known.

Buy Direct and Save!
Cal and Teresa's story is out now!

Cal’s hoping that he’s going to be able to adjust to retirement. He’s not the kind of man who knows how to relax and do nothing. He’s glad to be in Summer Lake with guys he used to work with—guys who’ve already made the transition from covert ops to a more regular kind of life.

His friends have met women and settled down with them, though. And that’s not in the cards for Cal. As far as he’s concerned, the female of the species may as well be a different species.

When he first meets Teresa, she only confirms for him that he has no clue how women operate. But she makes him want to figure it out. She’s a breath of fresh air that he doesn’t know how to handle. She’s very much her own person but before long, she has Cal wanting to figure out how to make her his person.

Teresa’s bowled over by the big, sexy, serious-looking guy who walks into her salon. After a less than auspicious beginning, she’s left disappointed. But not for long.

He might seem serious and a little bit intimidating, but Teresa can see through the tough exterior to the big-hearted guy underneath.

These two might not look like the perfect match on paper. But he makes her feel cared for in a way she never has before. And she brings out his softer side—and his smile, and boy what a smile it is!

Pick up your copy of this heartwarming romance today to follow Cal and Teresa’s journey. You’ll laugh and cry with them as they get a little help from his friends, and from her three-year-old granddaughter on their way to finding their happily-ever-after.

Add it to your Goodreads - other links coming soon ​

Buy Direct and Save!
​Silhouettes Shadows and Sunsets - Nina and Manny's story is Available now!

Buy Direct and Save!
Where the Rainbow Ends - Diego and Izzy's story is Available now!

Buy direct and at a discount on my new site SJMcCoybooks.com
​
Get your copy at the links below

Summer Lake Silver romances feature couples in their fifties and older. Just because a few decades—or more—have skipped by since you were in your twenties it doesn’t mean you can’t find love, does it? Summer Lake Silver stories find happily ever afters for those who remember being thirty-something—vaguely.

Buy Direct and Save!
Ted and Audrey's story is available now!

Get your copy today!

Add it to your TBR on Goodreads 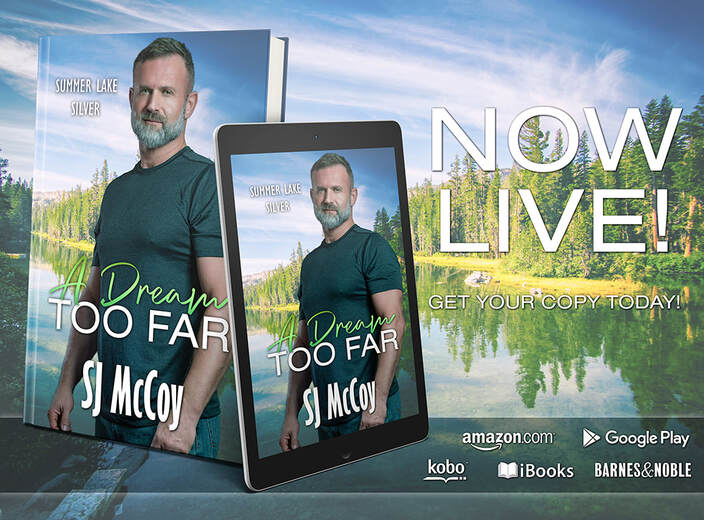 Buy Direct and Save!
Book Two in the Summer Lake Silver Series, A Dream Too Far, is now out!

If you've been with me for a while, Seymour and Chris will be familiar to you as Hope's dad and Jack and Dan's mom. If you're new to me and my books - don't worry, you don't need any background to enjoy this story for what it is. What is it? It's a tale of two people in their fifties who were each widowed young and who raised their children alone. He lost himself in his work, she filled her life with family and friends. Neither of them is looking for love, they each believe they're doing okay. They're about to find out that they could be a whole lot happier—together.

​Buy direct and at a discount on my new site SJMcCoybooks.com

You know those stories – where guy meets girl, they fall for each other, life does its best to tear them apart, but in the end, love conquers all and they embark on their life together?

He’s had an amazing career as one of country music’s biggest names. She’s raised a daughter and given her everything she needed to go out and succeed in the world.