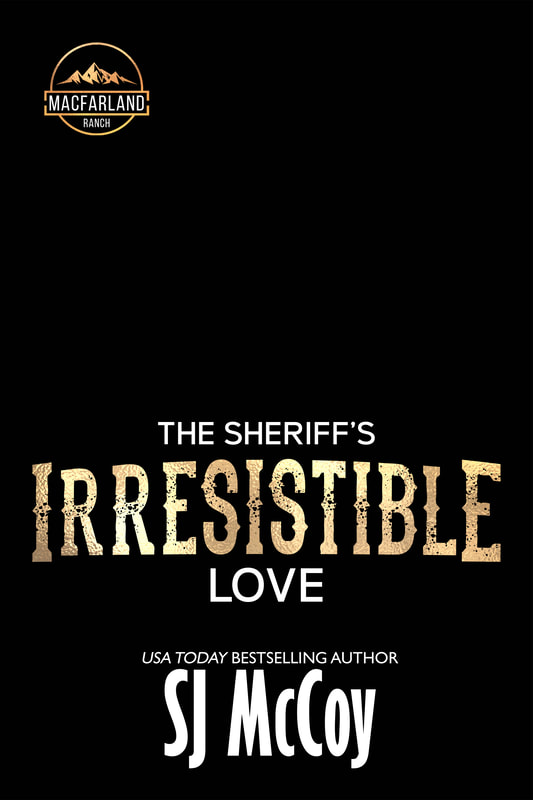 Or preorder your copy from the usual retailers:

Add it to your Goodreads

​The Sheriff’s Irresistible Love is the third book in the sweet n steamy MacFarland Ranch Western Romance series. It’s the first in the series to feature an older couple – in their fifties.

Deacon Wallis’ family history goes back seven generations in Paradise Valley, Montana. Six of those generations were the black sheep, the crooks and the lowlifes. Deacon’s determined to change the family history.

He might have been born on the wrong side of the tracks and raised by the town drunk, but now he’s a respected member of the community. After a stint in the military, he came home and started working in law enforcement. These days, he’s the Sheriff, but he’s probably prouder of the fact that his younger brother has followed in his footsteps and is one of his deputies.

He claims that his work is enough. He’s dedicated his life to repairing the family name, he can’t afford to think about children he might pass that name on to. He was married once, but she left and took the kids with her. They’re grown now with lives of their own, lives that don’t include him.

His chance for love and family slipped through his fingers many years ago, and there’s no way he’s looking to try again at his age.

Even though he’s not looking, he can’t help seeing Candy every time he turns around. She’s come to help out in the bakery where he gets his coffee every morning. Somehow – and he has no idea how it happened – she’s ended up renting his upstairs apartment. And even though he tells himself that he can still avoid her, his damned cat keeps going up to visit with her.

She seems to be as sweet as her name suggests, and soon it seems that he’s not going to be able to resist her charms any more than can avoid her. She’s bubbly and outgoing, and everything that usually drives him nuts, yet he’s constantly drawn to her.

But nothing’s ever come easy for Deacon. Trouble’s always had him in its sights, and it turns out that trouble is tracking Candy’s every step. If he can’t resist falling for her, he’ll have to risk everything to save her.

You'll be able to get it early and at a discount when you buy direct from SJMcCoyBooks.com

Or order your copy from the usual retailers: