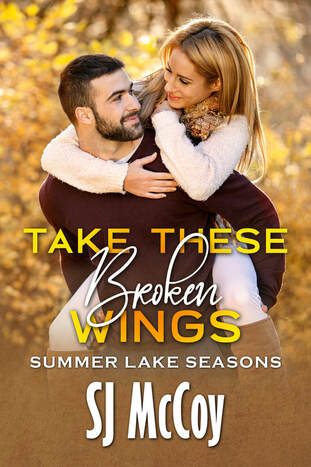 “Are you comfortable?”
Luke wanted to sit down on the couch beside her and wrap her up in his arms. She looked so small and lost somehow, even though this was her house. She was usually so composed and so well put together. Sitting there in sweatpants and the baggy pink sweatshirt he’d brought to the hospital for her, she didn’t look like herself. Maybe it was the bruises and the black eye.
She nodded and smiled up at him gratefully. “Have you ever considered a career as a nurse? I think you’d be great.”
He shook his head adamantly. “I’m not looking for a career change, thanks. I only ever wanted to be a pilot. I don’t intend to give it up now that I’ve finally made it happen.”
She leaned her head to one side, then straightened up with a wince. “If that’s all you’ve ever wanted, why did it take you so long to get into it?”
He pursed his lips. Was he ready to tell her why? To open up to her and let her know who he really was? Maybe she wouldn’t like him if she knew his humble background. Well, if she didn’t, then he wouldn’t think much of her either, and they’d be better off finding that out now. “How about I get us a drink of something and then I’ll sit down and tell you.”
“Okay. And thanks again for going to the store and stocking me up. That was sweet of you.”
He shrugged. “Just practical. What would you like?”
She smiled. “After the last few days, I would love a glass of wine, but I probably shouldn’t.”
“No. You definitely shouldn’t. It wouldn’t go well with the painkillers. How about a chocolate milk?”
She laughed. “I haven’t had that since I was a kid.”
“Did you like it back then?”
“I loved it. It was my favorite.”
“Then why did you give it up?” He went into the kitchen and poured two glasses to take back out. “Do you want me to set it on the coffee table?”
“No.” She held out her good arm. “I’ll take it, thanks.”
He watched her take a sip and smile before she gulped down half the glass.
“That is so delicious.”