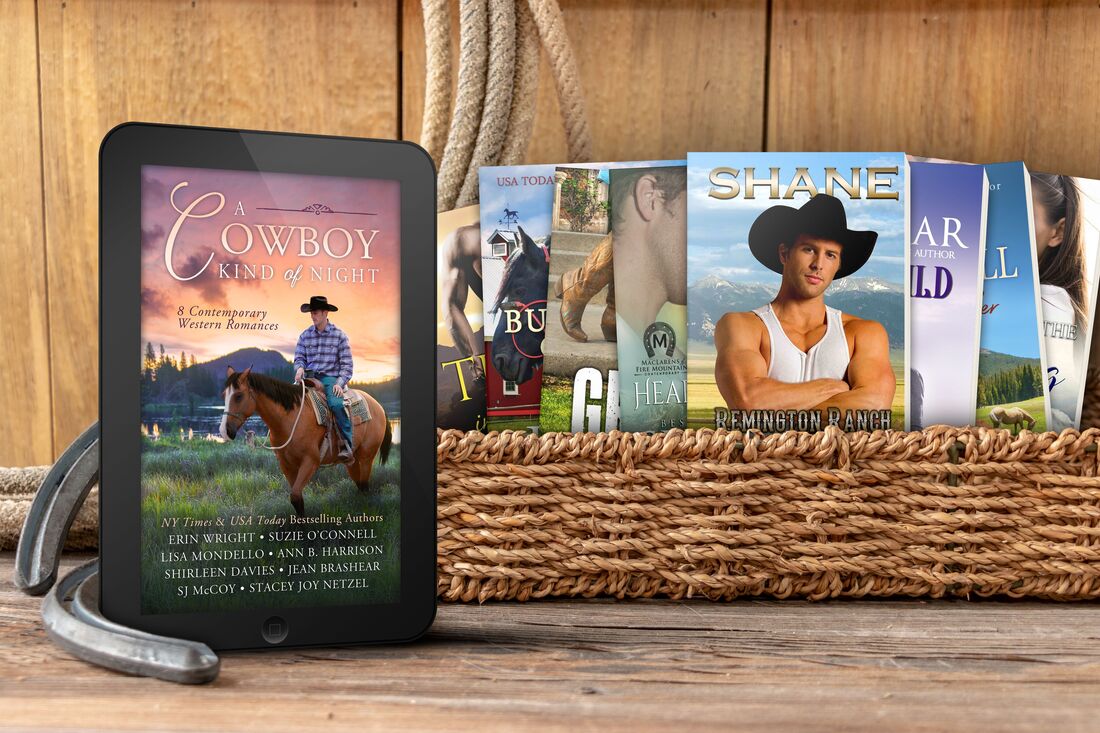 Are you ready for A Cowboy Kind of Night? If you like your guys in spurs and Stetsons, then this multi-author bundle is for you. Check out these eight sexy western romance novels, all for one great low price.
Shane by  SJ McCoy– In Cassidy's own words he’s walking temptation. She doesn't want a relationship but maybe a little temptation couldn't hurt? Shane knows he can have any woman he wants—apart from Cassidy—so why can't he think of any woman other than Cassidy? There’s no denying the attraction between them, but will it be enough to bring together a woman who doesn’t want anyone and a guy who wants everyone?

Bundle of Love by Erin Wright – As the town’s vet and the director of an equine therapy camp, Adam’s life is plenty stressful, and plenty lonesome. Then in strolls Kylie VanLueven, his very new and very pretty receptionist, with curves in all the right places. She's doing a good job at the clinic, but he won’t ever let it be more than that, despite the longing she stirs in him. Besides, he’s sure that she’s hiding a secret…

Last Surrender by Suzie O'Connell – Horse trainer Heather Brown has a talent for finding Mr. Right-for-Everyone-Else. Enter ranch hand Jeremiah Mackey. He’s made a lot of mistakes in his life, but he’s worked hard to turn his life around and he understands her like no one else. She’s willing—needs, even—to ignore her family’s open hostility toward him, but what will happen when someone from his past starts playing deadly games?

His Heart for the Trusting by Lisa Mondello – Mitch Broader has always dreamed of owning his own Texas ranch. When an old flame drops a baby on his doorstep, claiming he's the daddy, he's shocked. He can’t change diapers and work a ranch at the same time. When Sara Lightfoot rescues him with her particular knack for handling his precocious son, he hires her on the spot as a nanny. Can they both get over their past to have a future together?

Grady by Ann B. Harrison – Sheriff Grady Cooper isn't looking for love but when Lara Williams comes to town with her wayward daughter, he can't deny the attraction between them. As much as Lara dreams of having a man like Grady by her side, she knows that if he finds out about her dark past, it will leave her more vulnerable than ever.

Hearts Don't Lie by Shirleen Davies – What does he do when she refuses to back down? Mitch MacLaren has reasons for avoiding relationships, and they’re pretty darn good. Dana Ballard’s new job forces her to work with the one MacLaren who can’t seem to get over himself and lighten up. In his mind, a simple proposition can solve the problem. Will Dana make the smart move and walk away? Or take the gamble and expose her heart?

Texas Wild by Jean Brashear – The Bad Boy is Back in Town! Injury forces former SEAL turned playboy Hollywood stuntman Mackey home where teenage exploits made him a legend, only to find that his buddy's kid sister Rissa has grown up gorgeous. But if he thinks her girlhood crush will make her fall into his arms and help him avoid dealing with a haunting past and a future that looks grim, Mackey might want to think again.

Trust in the Lawe by Stacey Joy Netzel – Desperately afraid for her life, Kendra lies to her brother about why she turns up destitute on his doorstep, leading his ranch manager to suspect she’s a con-artist. Colton vows to expose her secrets, but he didn’t count on falling for the feisty city girl in the process. Somehow she must learn to trust the sexy cowboy—and her heart—before danger tracks her down...

Get your copy from your favourite retailer